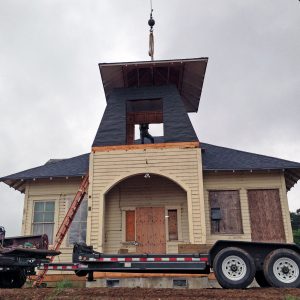 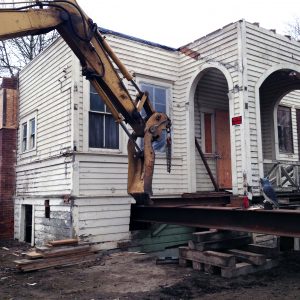 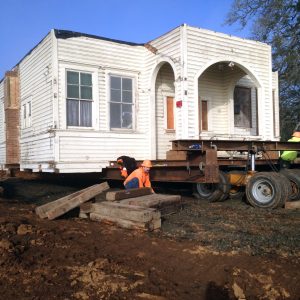 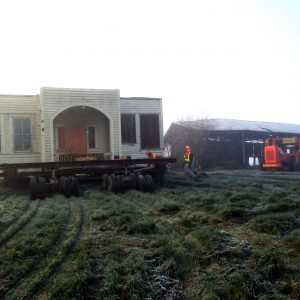 The Sunnyside School was built in 1911 and served the community until 1929 and was scheduled for demolition in January 2014.  Anonymous donors discovered the rich history of the school, and offered to have the school moved if a suitable location could be found in a timely manner. They offered to fund the construction of a foundation, and to stabilize the building.

The Knotts-Owens Farm, a nearby century farm owned by the City of Corvallis provided an ideal location as the farm’s management and conceptual site plan’s goal is to restore the Knotts-Owens Farm homestead to be a future living farm and museum, where individuals and school groups can come for field trips and classes on the history of farming in the Willamette Valley. Additionally, members of the Knotts-Owens family both attended and taught at the school. The Sunnyside School would serve as a visitor’s center and classroom/meeting room for visitors coming to the farm.

The Sunnyside School was located approximately one mile from the farm along highway 99 N. The size of the building, excluding the basement, is 896 square feet. Additionally, the project had to be completed in 30 days as the building was scheduled for demolition.
Although the schoolhouse was located less than one mile away from Knotts-Owens Farm, and did not cross any railroad tracks, it had to clear five power lines, thereby making the move relatively costly. In order to better manage the budget and the 30 day timeline, the project manager and general contractor opted to remove the roof and move the building in two sections.

Once the house was set in place, additional funds were raised to reconstruct the original bell tower shown in the building’s historic photos.  A local architect donated time to create construction drawings from the photo.  The bell tower was constructed off-site and brought in and set in place with a crane.

Prior to moving the house, the site at Knotts-Owens Farm was prepared with a construction road, and foundation pad. Once on-site, a foundation was constructed, and the house was stabilized and set on the foundation.

The house has only been vacant since August, 2013, and is currently in good condition. Once moved, the only immediate need for structural work was to reconstruct the front porch and steps, and provide a new roof. The donors had agreed to provide adequate funding to leave the school in a condition that will not require any immediate maintenance or structural improvements.

A New Home for Sunnyside School

The old school house now sits on the top of the hill under the grand oak tree on the historic farmstead.