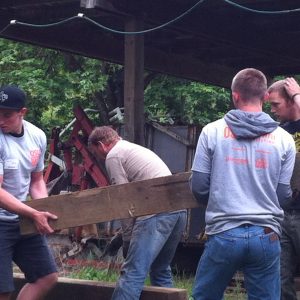 A Collaborative Project at Willamette Park

The local Rotary Clubs wanted to contribute to the community by funding a significant civic project. Working together, the Local Rotary Clubs, the Benton County Foundation, and Parks and Recreation staff chose to plan, fund, and construct a large picnic shelter at Willamette Park to replace the one that burned down in June of 2000.  The Willamette Picnic Shelter was designed and adopted as part of the Willamette Park conceptual plan update and Willamette River Greenway Permit approved by City Council in 2008.

In the past, Willamette Park had a large community picnic shelter that was frequently rented by the community for such events as weddings, family reunions, and social functions.  In June of 2000, the shelter burned down due to an act of vandalism.

The Rotary Clubs staged a significant fund-raising campaign by selling personalized pavers for the shelter floor. To heighten community awareness about the project, the local Rotary Clubs prepared a dynamic fundraising brochure.

Preliminary work, such as the engineered drawings, building permits, and a utility plan was funded with the insurance money the city had from the previous shelter. Additional city funds were added to the project to facilitate the installation of a sewer line to service a sink inside the shelter as well as a future restroom.